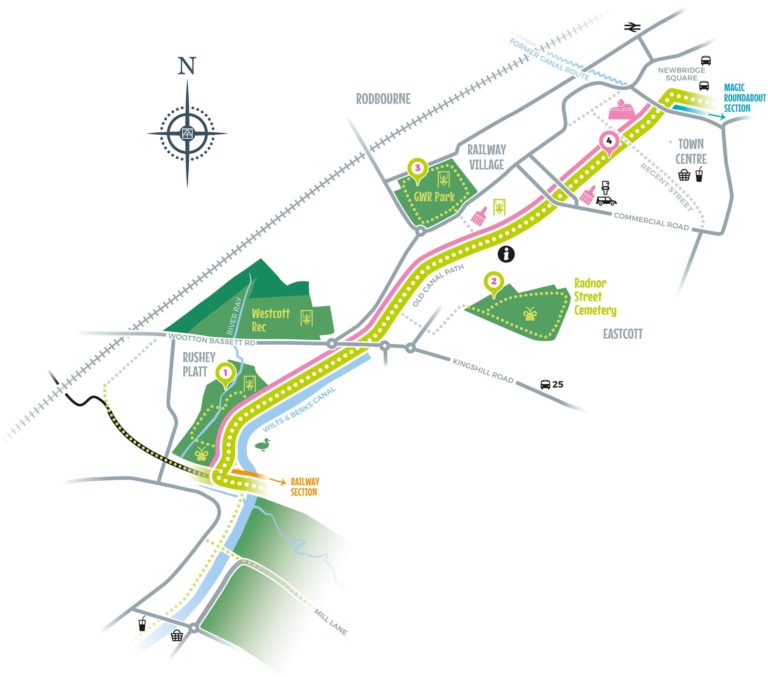 This section of the Green Trail follows the route of the Wilts & Berks Canal. It carried goods to and from Swindon from 1810 – including the building materials to construct the Great Western Railway, which ironically eventually led to its decline. As railways moved freight more efficiently than canal barges, the canal slowly fell into decline and was officially closed in 1914.

The canal ran for 52 miles / 83.6 km joining the Kennet & Avon Canal at Semington to the River Thames at Abingdon; it reached Swindon in 1804, six years before opening. It initially prospered carrying its main cargo of coal from Somerset. The construction of the Rushey Platt section of the canal was fraught with serious engineering difficulties caused by the wet, marshy land. Decades later, the same problem was encountered in the construction of the railway line, though the canal provided a cost-effective route to bring in large quantities of building materials needed for the railway which ran close to much of the canal route.

The Green Trail follows the route of the Wilts & Berks Canal north-eastwards. Just keep walking in the same direction. The Canal section starts on the tow-path at Skew Bridge. At the canal’s end, cross over Kingshill Road onto the now-paved route between the backs of houses, under and over roads into the town centre. Here the former canal is named Canal Walk and leads to Newbridge Square through an underpass under Fleming Way.

Head off the towpath at one of the gaps in the hedgerow for Rushey Platt. The tow-path can be rejoined further north towards Kingshill Road.

Rushey Platt is a remnant of the lush wetland marsh that used to cover much of South Swindon before land drainage for agriculture made this type of habitat uncommon in Wiltshire – it is now a special habitat and wildlife reserve.

One side of the Reserve is bounded by the River Ray which rises at Wroughton, and flows through Wichelstowe before passing through parts of West Swindon, where it merges with Lydiard Brook before reaching the River Thames just to the east of Cricklade.

Around 30 yards / 25 m after crossing Kingshill Road, head right off the tow-path, and over William Street onto Stanmore Street. Follow the steep hill round into Radnor Street to the gates of the cemetery (just after the junction with Clifton Street).

The cemetery was established in 1881 in response to a lack of burial space in the town. 33,000 souls are buried in the half-acre site, and there are 103 Commonwealth War Graves. Now closed to new burials, Radnor Street Cemetery has been a designated Local Nature Reserve since 2005.

In 2015, local artists created the current mural to celebrate the 175th anniversary of the Great Western Railway in Swindon. Elements of the design reflecting Swindon include:

There have been several murals here over the past 40 years. In 2001, a mural was created by local artists based on drawings from children from nearby Robert Le Kyng School, as part of a community project to improve the area. Earlier, in 1981, local artist, Ken White painted a canal scene. A successful, well-known artist, Ken White painted many distinctive murals throughout Swindon, though many are now gone the Golden Lion Bridge mural can be seen on the next section of Green Trail.

The Canal at Cambria Bridge Road

The Cambria Road Bridge was built in 1877, modified in 1893 and refurbished in 1978. One of iron plates that protected the brick abutments from wear is still in place on the left side. This was the tow-path side of the canal and several grooves made by tow-ropes can be seen.

There was a large wharf and timber yard here, roughly where the playground and kickabout area are now located.
A more recent addition in front of part of the mural is a community fruit garden containing several different types of fruit bushes which was planted in Spring 2021 by local residents.

Leave the canal route and join Cambria Bridge Road, by walking left. Carefully cross over Faringdon Road to visit the GWR Park in the Railway Village.

The park was purchased in 1844 for the recreation of railways workers living in the Railway Village. It was first used as a cricket pitch – the great, Victorian England cricketer, WG Grace, was dismissed here, by a local man, for a ‘double duck’ – for the only time in his career. It later developed to include an ornamental garden, with herbaceous borders, glasshouses, fountains, ornaments and a bandstand.

Continue to follow the route of the old Canal under the road bridge at Milton Road, then under the multi-story car park and into Wharf Green open space.

Running the entire length of the car park wall is a mural created in 2021 called ‘Mother Earth with Flower of Life’ by members of Artsite, Peter Cowdy and Dayna Baxter.

Rising above the Brunel Centre, dominating the Swindon skyline, is the David Murray John Tower, which opened in 1976 – it has 21 storeys and is 272 ft / 83 metres high. It was named for the long-serving Clerk of Swindon Borough Council, who was a driving force in the post-World War Two regeneration of the town. His last act in office was to sign the tower’s construction contract – he had long campaigned for a landmark as a centre point for the town centre.

Just before the pedestrian crossroads with the ‘Stacked Fountain’ artwork, look out on the Bridge Street side for a relocated 19th century, Grade II listed canal milestone showing the distance – 26 miles – to the start of the Wilts & Berks Canal at Semington near Melksham.

The statue is a replica, sculpted by a local artist Carlton Attewood in 1977 to celebrate Queen Elizabeth’s golden jubilee. It replaced the original weatherworn lion which had adorned the roof of The Golden Lion public house, close to this site, and gave its name to the Golden Lion bridge which crossed the canal here. Golden Lion Bridge was an elaborate iron lift bridge built in the GWR Works in 1870 to replace an earlier timber swing bridge. An adjacent pedestrian footbridge was added in 1877 and the road became known as Bridge Street. The iron bridge was reinforced in 1904 to facilitate the new tramway, but demolished in 1919. A mural depicting the bridge can be seen on the end house in Medgbury Road on the ‘Magic Roundabout’ section of the Green Trail.

Follow the Green Trail along The Parade towards Fleming Way.

In the centre of The Parade is a large Indian Bean tree (Catalpa bignonioides) which, despite its common name, is native to the southeast of the United States. It produces large leaves and attractive flowers followed by long, thin bean-like pods that often stay attached to the tree during the winter months.

At the end of The Parade, walk through the subway under Fleming Way. This marks the junction where the former Wilts & Berks Canal joined the North Wilts Canal, Swindon’s second canal, which ran from this point northwards via Moredon to join the Thames near Cricklade.