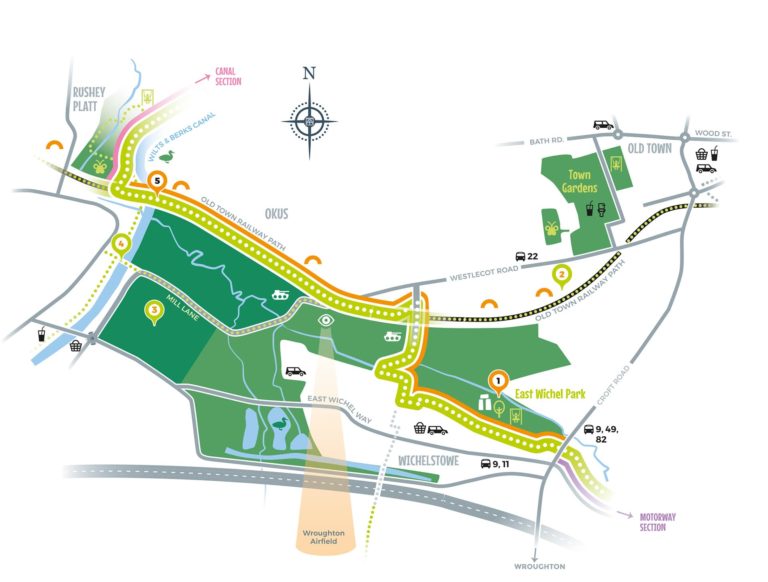 The Railway section takes you to Swindon’s first Tiny Forest, through Wichelstowe, up though West Leaze and along the disused railway path.

Follow the footpath alongside East Wichel Way. When you reach the first set of houses, follow the path to the right and along the front of the houses in Collard Close until you reach East Wichel Park.

Here there is a play area, a ball court, a Tiny Forest and a modern stone circle constructed with local sarsen stones.

Swindon’s first Tiny Forest was planted in March 2021. A Tiny Forest is a dense, native woodland that helps mitigate the effects of climate change, supports urban wildlife, and connects people with nature – an on-site information board gives more information.

Leave East Wichel Park and continue along the Lohart Lane pavement, around East Wichel Primary School and onto Stonehenge Road until you reach the bridge. Walk across the bridge uphill on the concrete road towards Old Town.

CAUTION: This is particularly steep, and there are steps at the top to gain access the old Railway line – it can be icy in cold weather.

The railway path follows the route of the Midland & South Western Junction Railway (MSWJR), formed in 1884 by a merger of Swindon & Cheltenham Extension Railway and the Swindon, Marlborough & Andover Railway (founded 1881) that connected Andover with GWR’s London to Bristol line.

The original plan to join the tracks was to tunnel 830 yd / 760m through Old Town hill; when this proved too technically difficult and expensive the project was abandoned in what is now Queens Park. The final route, wound its way around the southern edge of Old Town hill to connect the railway lines close to the current railway bridge on Wootton Bassett Road.

The MSWJR was closed for passenger traffic in 1961 but continued in use to bring in materials for the construction of the M4 motorway. The track was lifted in the early 1970s and the current recreational trail developed in the early 1980s.

Around the old railway bridge, on the left side of the concrete road, there are several concrete blocks laid in a line. Now covered in mosses and lichen, these flat-topped pyramids are Tank Traps installed as local defences during World War Two.

Pass under the bridge and immediately up the steps on the left to gain access to the old railway line. Continue westwards over the Mill Lane bridge, towards West Swindon.

Turn east on the railway path.

The path passes through a ¾ mile / 1.2 km long cutting, blasted through solid rock to allow the track to reach Swindon Town Station in Old Town (now Signal Way Industrial Estate). It is designated as a Site of Special Scientific Interest (SSSI) for its geological interest dating from the Jurassic period.

Opened in 1894 on the site of a disused quarry, the Town Gardens is a formal Victorian Park with a café kiosk, aviary and public toilets. For more information please visit our Town Garden page.

Walk to the very top of the concrete road to the junction and walk westwards, out of town, on Mill Lane.

Just before Mill Lane turns sharply towards Wroughton, and opposite West Leaze farmhouse is the site of medieval settlement, designated as a Scheduled Monument. Enclosed by a boundary ditch, and the River Ray on the north side, the village’s main street ran north-south with buildings on either side – now bumps in the field. There is evidence of ridge-and-furrow cultivation. Archaeologists have also found Roman remains here, suggesting settlement over 2,000 years ago.

At the right-angled turn in the road you can walk straight ahead to join the Wilts & Berks Canal towpath and continue the Green Trail along the canal).

Along the former railway line, there are five wheel sculptures that represent Earth, Air, Fire, Water and Conceive. Created in 1995 from Portland stone by sculptor, Alex Peever, each consists of two parts: a small wheel showing the element, and a large wheel with a short piece of poetry by Fiona Sampson. A railway sleeper lies across the path connecting each pair of wheels.

Look southwards for impressive views across Wichelstowe to the old hangers at the former airfield at Wroughton, now used as an archive and storage facility by the Science Museum, and to the Marlborough Downs beyond. Also keep a look out for red kites and buzzards soaring above, or deer in the fields below.

Directly after the Green Trail passes over the Wilts and Berks Canal on Skew Bridge, a side path descends on the right to the Canal towpath. The railway path continues until Mannington.

Built in 1883, and known as Skew Bridge because it crosses the canal at a skew. The underside of the bridge shows the the brick pattern of its construction. Directly under the bridge, a design featuring a water vole and a snail are incorporated into the metalwork of the tow-path railings. The construction of Skew Bridge here across the canal proved difficult for the railway company. The ground at Rushey Platt was waterlogged and marshy and the shifting ground wreaked havoc with the efforts to build the embankment for the railway line: the problem was solved by depositing tonnes of stone into the marshes as foundations for the bridge.

Walk back under Skew Bridge on the towpath.

Just beyond the Skew Bridge look down to the right of the tow-path to see a stone aqueduct that has carried the canal, and its tow-path, over the River Ray since around 1810.